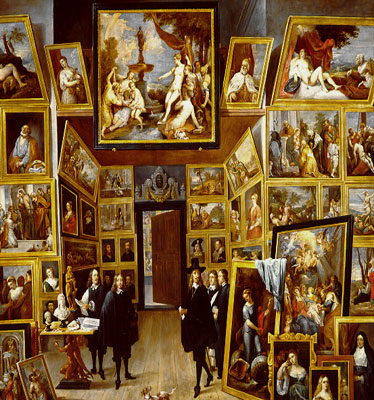 I managed to spend an hour or two in the Prado last weekend (and in the very relaxing Botanical Gardens opposite afterwards).
I was in Madrid at meetings held in parallel with the DC-2005 conference which continues to discuss metadata issues ten years on.
I was amazed to see how much photography was going on in the museum: cellphones and cameras were clicking everywhere. If there was a prohibition on use of flash, I did not see any sign of it. I was not thinking so much of IPR issues; I was thinking of the impact on the pictures. I suppose that if some of them do fade, there will be lots of photographs to remind us what they looked like 😉 Preservation by participation …
Watching people point cellphones at old masters was a very clear reminder – as if one needed one after seeing the growing use by media companies of personal pictures and video footage from phones and cameras – of the growing role of life-caching.

Consumers are collecting, storing and displaying their entire lives, for personal use, or for friends and family, even the entire world to peruse. The necessary enablers are in place for what TRENDWATCHING.COM has dubbed LIFE CACHING, with Nokia, Microsoft, Google, Apple, Samsung and many more getting into the game. [Trends | Listed alphabetically]

And coming back to preservation, Neil Beagrie wrote interestingly about memory and this ‘digital estate’ a while ago in D-Lib Magazine.

The Calgary central library was on first impression the finest public building I have been in for years.
Lorcan Sep 11, 2019 3 min read
Institutions

We are now used to memory institutions as a way of collectively referring to libraries, archives and museums.
Lorcan Dec 7, 2018 8 min read
Institutions

Libraries are not ends in themselves, but serve the interests of the organizations of which they are a part. As university emphasis varies around research, education and career poles, we can expect to see libraries evolve to support those emphases more strongly.
Lorcan Oct 18, 2018 8 min read