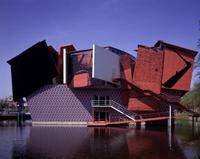 Some years ago, I worked with a group assembled by the relevant part of the European Commission to work on ideas about overlap between libraries, museums and archives.
As the poet said, ‘the words of things entangle and confuse’. We spent a long time discussing words and what was meant within the respective curatorial traditions represented. archive, collection, record: we brought different associations to our words. We also felt we needed a collective name, a handle to facilitate discussion, and although we went with memory institution it was with mixed feelings.

Memory institution. We have no term in routine use which includes libraries, archives and museums. Again, for conciseness, we sometimes use cultural institutions and memory institutions in this inclusive sense. [Main Articles: ‘Scientific, Industrial, and Cultural Heritage: a shared approach’, Ariadne Issue 22]

Ever since then, I have always wondered if the resistance to a collective name indicates a deep irreducible difference of identity and purpose or if it is a transient surface feature.
Certainly, in the network world the museum and archival orientation towards exhibition and evidence, respectively, is becoming much more important for libraries. Libraries need to think about evidential integrity and context in relation to digital repository services, and about selectively ‘displaying’ their collections in digital environments. See the exhibition of rare scientific books at UCL for an example of the latter.
I visited The Groninger Museum while at LIBER. It is a striking building: the work of several architects, each completing a piece. It is on the canal, and partly underwater. Website elements echo the building – the tiles surrounding the picture for example. I liked the way that you could move between several interesting exhibitions in different areas: ceramics (from Ming to Memphis), a conjunction of contemporary and historic costumes, a show of German expressionists, and so on.
There was an exhibition of the work of Hussein Chalayan, a British-based, Turkish Cypriot fashion designer and artist who before this was unfamiliar to me. There was a mix of fashion, video, photographs, and installations, nicely complementary pieces of a well-thought out assembly. As I walked around, the librarian in me kept wondering how this collection of documents and artifacts could be packaged and transmitted through time as a citable record of his work.
Relationships between libraries, archives and museums are interestingly covered in the presentations available from the RLG July 2005 Members’ Forum.
GLAM – galleries, libraries, archives and museums.