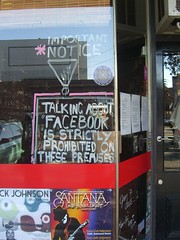 A nice picture. I saw it via Martin Weller who uses it alongside some general reflections about Facebook.

You only understand it by doing it – as many people have commented (e.g. Ewan), in order to understand web 2.0 you have to act 2.0. I think too many academics are guilty of seeing social networking, or any popular tool, as something to be researched, but not something to be experienced and used. This is both rather a snobbish attitude and also misses the point. Signing up for an account, dropping in for a couple of weeks, doing a survey and then disappearing does not gain you an understanding of how these things are really being used. [The Ed Techie: The Facebook lessons]

I do feel a little overwhelmed at the moment by the various reports about search, generations, and web 2.0 that are being discussed. Yet another survey is less interesting than some reflective discussion or demonstration of possibilities and direction.

Incidentally, he also points to the Economist debate about the value of social networking in Education.