[Note: the links in the Wikipedia quotes do not work as I have not changed the relative URLs to absolute ones] 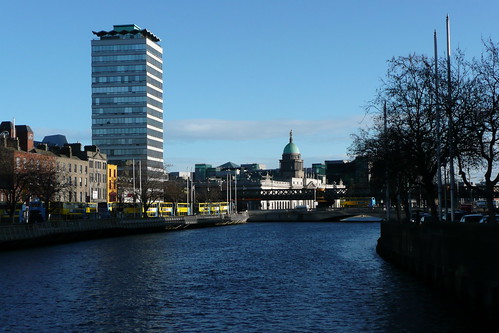 I was looking up James Connolly just now as I prepare some slides for a presentation at the 2008 LIR Annual Seminar. The event is being held in Liberty Hall, which has a historic relationship with Connolly, and I planned to use this as an excuse to show the Worldcat Identities page for him 😉 I noticed that one of the subject headings in the Worldcat Identities cloud for Connolly was for John Maclean. I went to look for John Maclean in Wikipedia (googling his name and Wikipedia which is how I tend to look for things). I clicked through and was surprised to read this:

Without noticing I had clicked through to the Scots version of Wikipedia.

Good for Wikipedia for having a Scots version is what I say ….
This prompted me to look for an Irish version, and there is one. Here is the entry for Séamus Ó Conghaile, the Irish version of James Connolly.

There is a page listing all the different languages in which there is a Wikipedia with some statistics. I was particularly interested to see how they described their depth indicator.

The “Depth” column ((Edits/Articles) × (Non-Articles/Articles) × (1 − Stub-ratio)) is a rough indicator of a Wikipedia’s quality, showing how frequently its articles are updated. Note that it doesn’t refer to academic quality (which obviously can’t be mathematically computed anyway), but to Wikipedian quality, i.e. the depth of collaborativeness—a descriptor that is highly relevant for a Wikipedia. Depths above 300 for Wikipedias below 100 000 articles are dismissed as irrelevant. [List of Wikipedias – Meta]

The English language Wikipedia is the only one to have more than 1 million articles. A further eighteen have more than one hundred thousand and less than a million.
Picture of Liberty Hall via ~inky.