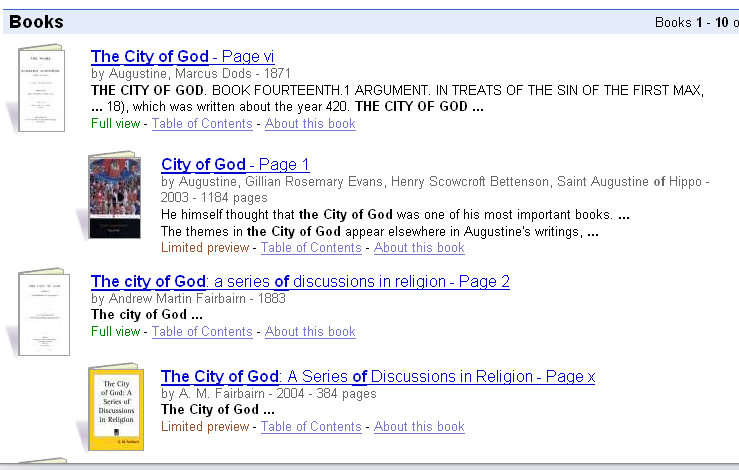 I mentioned Augustine of Hippo the other day, in the context of the interesting work that Google is doing to develop a contextual page for each book (resources about it, resources related to it, etc. See this Penguin Classic with the nice cover, for example). Searching for the ‘City of God’ in Google Book Search pulls together a couple of editions, and notice in the picture that a couple of editions of the second result are also pulled together (the indented entries and the un-indented entry they follow are versions of the same work).
I was looking at this because Dan Clancy, of Google, mentioned that they were pulling together members of work sets in this way at the Working Group on the Future of Bibliographic Control meeting the other day. This is interesting and valuable. Presumably this is happening programmatically. They do not pull in The City of God Against the Pagans further down the page, another translation of the same work. They do not pull in De Civitate Dei of which these are all translations. Although, they do pull together a couple of different selections of De Civitate Dei itself (and it might be reasonable not to pull together selections with the complete versions?). It does not pull in a French version.
Now, the entry for Augustine in Worldcat Identities says the following about The City of God: ‘369 editions published between 1466 and 2005 in 16 languages and held by 9,731 libraries worldwide’. Here are twenty-five.
I think that it is interesting to place an algorithmically generated (and still very partial) resource like the Google Book Search summary page alongside the ‘expert’ generated bibliographic data in library resources, and aggregated here in Worldcat and its derivative, Identities (and this is just the application to show up inconsistencies in the data!).
Suggesting that one approach is better then the other seems to me to be a fruitless direction. There is a lot to be said about each in many dimensions. They are complementary and can amplify, correct and refine each other. Over time the balance between them may change, but for the moment think how interesting it would be to have them working together.
Aside: In my previous GBS message, I mentioned how St Augustine was being recognized in A portrait of the artist as a young man and placed on the map in Florida. Looking at text of The City of God I was amused to see ads for real estate in Jacksonville and St Augustine scroll by at the bottom of the screen. That said, it seems to me that we are becoming increasingly tolerant of such errancies as a reasonable price to pay where the value of a programmatic approach is visible?
Related entries: