So here is a chart showing the choices made by those of my Facebook ‘friends’ who chose to disclose political preferences in their profiles. 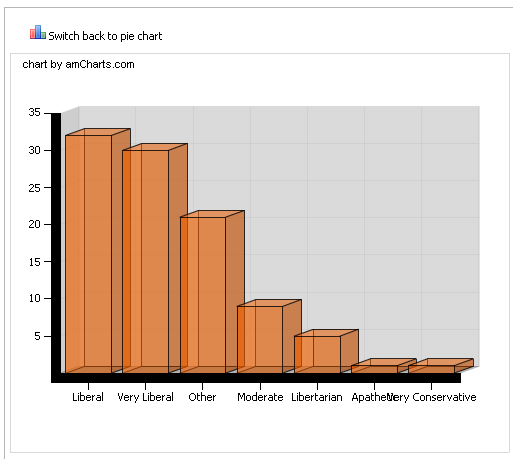 As I suggested the other day one would expect a ‘liberal’ emphasis in the library community. Although I wonder what the distribution is among those who chose not to disclose.
In this context, I was interested to read this post by Greg Mankiw earlier in the week.
The chart is generated by the Socialistics application. Given its name, maybe it puts a finger on the scales 😉
Socialistics is a creation of Techenlightenment, which appears to exist to create Facebook applications:

Techlightenment is a brand of D.sruptive Limited, an innovations house. We don’t only build application for client, but we implement our own thinking into the technology we build so as to accelerate understanding of the marketplace. A recent example was Socialistics, which received rapid critical acclaim. This wasn’t simply an application, but a method of understanding social relationships. [Techlightenment: an enlightened approach to technology]

Workflow is the new content 1: looking at research support and engagement

The phrase 'workflow is the new content' captures an important insight. In the digital environment we often create, use and share content through workflow applications.
Lorcan Feb 21, 2022 10 min read
UX

The library does not have a singular network presence. There may be a main website, but the library also syndicates its presence to other venues (e.g. RSS), has unbundled to social sites (e.g. Facebook), and sources activity in the cloud (e.g. LibGuides).
Lorcan Apr 20, 2014 5 min read
Books