I prefer ‘crowdsourced’ to ‘user contributed’ but neither works very well for me. In particular ‘user contributed’ does not seem a good term at all for a variety of reasons. Anyway, I was looking at the new catalogue at Ottawa Public Library powered by Bibliocommons earlier (following a mention by Stephen Abram). 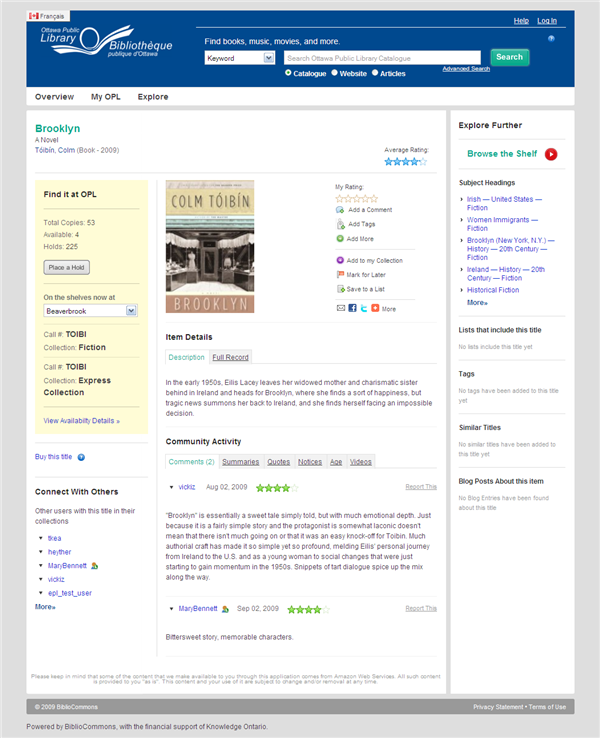 There is much to like about this. It is not organized around the bibliographic record, but places that data in a context more aligned with user interests. Indeed, the bibliographic data ‘block’ is hidden behind a tab. The most prominent features, alongside the picture, are user actions: it invites readers to do things. You can add data, add it to your own personal collection, add it to a list. I liked the Browse the shelf feature. This is one of several options which allows ‘exploration’ based on attributes shared with the displayed item.
What jumped out at me was how the block at the bottom of the screen was named: Community activity seemed like a very good name in this case.
The community features are interesting and feel familiar from other environments. A reader can ‘connect’ with others who have selected the item being viewed. The connections work across libraries in which Bibliocommons is deployed. Here is one of the people listed on this display. 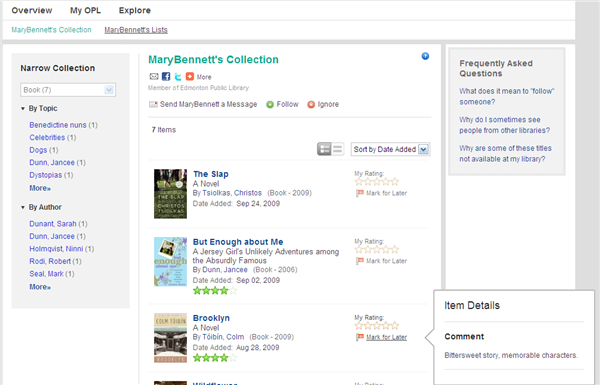 The left hand column here carries through the ‘narrow by facet’ feature found on results pages.
Some details about Bibliocommons are provided in an article in the October 2009 issue of The Walrus. Here are some excerpts.

The system launched in Oakville in July 2008; Edmonton and Ottawa go live this fall; locations across Ontario and British Columbia, and as far away as California and Australia, will follow.

Instead of relying on librarians to act as gatekeepers for collections that are increasingly virtual and global in scope, BiblioCommons harnesses crowds of users to guide one another — a familiar Internet tactic.

Getting people to participate in BiblioCommons will require seamless in-tegration with existing library catalogues, so that input from other users — and the opportunity to contribute — arise naturally from the experiences of browsing the catalogue and renewing books. The greater technical challenge lies in integrating the patchwork of different systems across the continent. “Librarians care a lot about the details of their catalogues,” Jefferson says diplomatically. But libraries have one key advantage over commercial sites: “People really want to support their libraries,” she says. “There’s a goodwill that Amazon or Chapters simply don’t inspire.”

I enjoyed looking around this and other Bibliocommons sites. It will be interesting to see how Bibliocommons develops, and whether it achieves the scale of participation to succeed more widely. It is not about ‘user contributed’ content, but what my colleague Stu Weibel calls ‘social bibliography’, or maybe ‘community bibliography’ (OK, let’s be generous abut the term ‘bibliography ;-). Community, as I remarked the other day, is the new content.
Related entries: