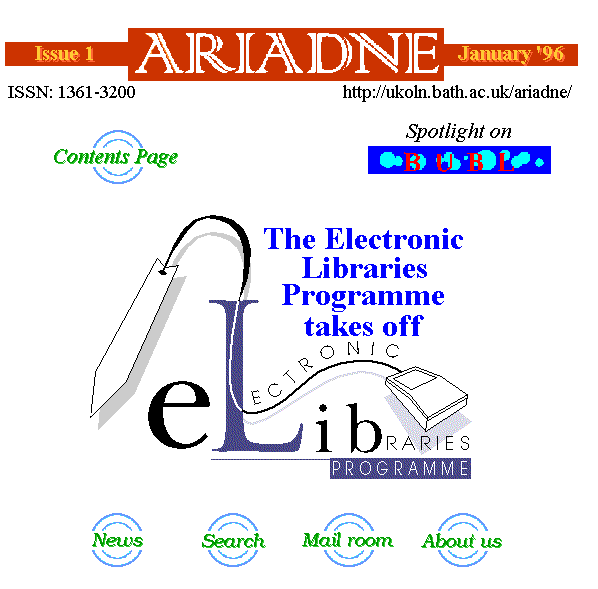 I am reminded by John Kirriemuir that Ariadne first appeared ten years ago today.
Ariadne is a web-based magazine which has reported on UK and wider digital library developments. It is still going strong.
Ariadne was established by John MacColl (now at the University of Edinburgh) and myself as a collaboration between the University of Abertay and UKOLN, with initial support from JISC. The original idea was John’s. Alison Kilgour was the first editor, and John Kirriemuir was the first web editor. It is now a web-only publication from UKOLN: the print version disappeared some time ago. A print compendium of articles was published in 1999.
Ariadne was established in close relation to eLib: the electronic libraries programme, a UK digital library initiative which established the JISC tradition of project-based digital library activity. The eLib program director was Chris Rusbridge.

Ariadne represents a major repository of documents covering the historic development of digital library activity in the UK, as well as offering a general platform for publication. It is openly available on the web (thanks to continued support from UKOLN and its funders) and continues to be a rich source of description and opinion.
Others associated with the development of Ariadne have been Lyndon Pugh, Philip Hunter, and the current editor Richard Waller. Long may it continue!
Note: The first issue carries a review of BUBL by Traugott Koch, coincidentally now working at UKOLN. At the time of the review BUBL was still hosted by UKOLN at the University of Bath, yielding the wonderful URL: https://www.bubl.bath.ac.uk. It moved soon after.