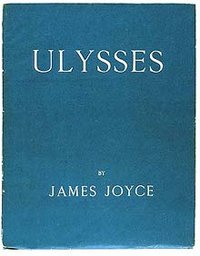 I came across the following lines in Derek Mahon’s Selected Poems this morning. They are from The Joycentenary Ode, a poem written in a Joycean idiom …

Now maybe my ears are especially sensitized to such issues (from our FRBR work) but I wondered if we were meant to hear works and books in wooks. And there are certainly many erudite editions. Indeed, this is of special interest in the case of Ulysses whose textual history is a matter of controversy. Which edition is being read is therefore quite important for some readers, while maybe not of special interest to others.
This is one of those details which will be worked through as we look at mass digitization and collaborative storage initiatives (which share many issues), and at recording such activities within our bibliographic apparatus. The word book is actually used in various ways in different conversations, sometimes referring to a work (Ulysses) irrespective of its embodiments, sometimes referring to a specific manifestation (the first edition published in Paris for example), or a specific copy (the physical book sitting on the table beside me as I write, which happens to be the OUP 1993 edition which reprints the 1922 text). We already recognize that we will probably want to digitize different translations (which are expressions in a FRBR sense), but what about different manifestations, or indeed special copies, which have been annotated by a significant commentator for example? The answer will depend on requirements and resources.
Whatever happens, OCLC and RLG are already in discussions about how one records the digital versions. I think this is quite important. We have a rich resource describing our shared bibliographic resource and there is value in maintaining its integrity in relation to the range of book materials curated by libraries.
Incidentally, Ulysses comes 134th in our list of top 1000 works. This is a listing of the most widely held works in libraries. Ulysses just follows Aristotle’s Poetics, and is folled by Rostand’s Cyrano de Bergerac. It is two places ahead of that other modernist eminence A la recherche du temps perdu. Reading through this list gives a sense of the complex publishing history many ‘books’ have.
Image via Wikipedia.