An off-topic holiday note for non-US readers. The first year or two we were in Ohio we spent quite a bit of time driving around the State. This lasted only so long: our children protested about long drives. For them, a long drive is anything that involves traveling further than to the mall 😉
Before we got any more general sense of geography and economy, we were immediately and superficially struck by four things. First was the aerial landscape of gas station and restaurant signage around highway exits, a general phenomenon but new to us. Second was the realization that we had never been so far away from the sea 😉 Third, was the often grand civic and commerical architectural presence in many towns: the courthouse in the central square is a common pattern. This is all the more striking given a general low, plain, spread of buildings, and the relative emptiness of many of those downtowns. And fourth was the density of the college/university presence; in fact, at one stage, thinking only of parents again, we thought we might construct itineraries around towns with liberal arts colleges. 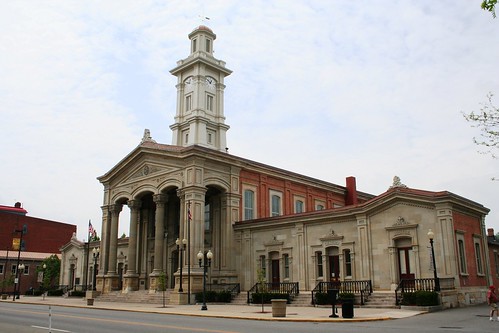 One of the Christmas gifts to be exchanged last week was Building Ohio: a traveler’s guide to Ohio’s urban architecture by Jane Ware. In the introduction, the author conveys the views of Doug Graf, a professor of architecture at OSU on why Ohio has “a unique stock of good buildings”. I don’t have enough knowledge to weigh the judgments but was interested to read them ….

First, the state was located so that it was settled at the right time, when the nation was new, and moving west of the Alleghenies was not yet a commonplace. People came to Ohio with tremendous confidence in the future and in this new place. “Each town had the potential of being the new Athens,” Graf said. Each town had to prepare for greatness with public space and public buildings (the green and the courthouse), with institutions (college, seminary, opera house), with quality structures. That sense of optimism diminished as settlement moved west; the farther west you go, the less interesting the towns are; and private colleges become rarer and rarer. ….

Second, Ohio had industrialization which made it rich; at one time or an other, every county had money. Agriculture and industry were strong and widely dispersed, an unusual pattern; in other places wealth was more concentrated. As late as 1950, Ohio was the only state with so many as six cities with populations of more than a quarter million. Moreover, these larger cities and many smaller ones stayed prosperous with industrial niches in, say, glass, cash registers, tires. Communities competed with one another.

Colleges, were, – and are – everywhere. “When you get to a small city in Indiana, you don’t expect to find a college” says Graf. “But in Ohio, every town has a college, many of them fairly good. So you have money in a cultured venue that values the town. Then buildings will matter, will be thoughtful, will be a natural embellishment of the place.”

Finally, Ohio has many examples of innovative hybridization, which depended on a general interest in what was going on in the rest of the world. The hybridization was reinterpreting styles or, say, combining elements of both New England and Virginia town layouts. The latter had central greens containing an important building, while New England towns had a central green with public buildings facing into it and a commercial street off to the side. ….

The picture is of Ross County Courthouse, Chillicothe, Ohio. It is taken by my OCLC colleague Giles Martin who has a very fine collection of pictures of Ohio buildings on Flickr.